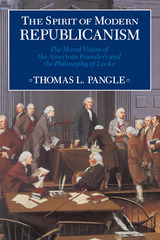 The Spirit of Modern Republicanism sets forth a radical reinterpretation of the foundations on which the American regime was constructed. Thomas L. Pangle argues that the Founders had a dramatically new vision of civic virtue, religious faith, and intellectual life, rooted in an unprecedented commitment to private and economic liberties. It is in the thought of John Locke that Pangle finds the fullest elaboration of the principles supporting the Founders' moral vision.

"A work of extraordinary ambition, written with great intensity. . . . [Pangle offers] a trenchant analysis of Locke's writings, designed to demonstrate their remarkable originality and to clarify by doing so as much as the objective predicament as the conscious intentions of the Founding Fathers themselves."—John Dunn, Times Higher Education Supplement

"A forcefully argued study of the Founding Fathers' debt to Locke. . . . What distinguishes Pangle's study from the dozens of books which have challenged or elaborated upon the republican revision is the sharpness with which he exposes the errors of the revisionists while at the same time leaving something of substantive value for the reader to consider."—Joyce Appleby, Canadian Journal of History

"Breathtaking in its daring and novelty. . . . Pangle's book is tense and tenacious, a stunning meditation on America's political culture."—John Patrick Diggins, Transactions of the C. S. Peirce Society

AUTHOR BIOGRAPHY
Thomas L. Pangle is professor of political science at the University of Toronto. He is the author of Montesquieu's Philosophy of Liberalism and the translator of The Laws of Plato, both published by the University of Chicago Press.
TABLE OF CONTENTS


Preface
Introduction
Part One - A Critique of the Leading Interpretations of the Political Theory Informing the Founding
1. The Old Orthodoxy and Its Demise
2. Marx and Weber
3. The Hartz Thesis
4. "Classical Republicanism"
Part Two - The Framers' Conception of Civic Virtue, and the Philosophic Contests Out of Which That Conception Emerges
5. The New "Publius"
6. The Classical Analysis of Civic Virtue
7. The Modern Rivals of the Classics
8. The Eclipse of the Intellectual Virtues
9. The New Meaning of the Active Virtues
10. The New Basis of "Legitimate Government"
11. Liberty and Human Nature
12. The Unanswered Questions
Part Three - The Lockean Conception of Human Nature
13. The Unifying Thread of the Two Treatises
14. Property
15. The Problem of Family
16. The Rational Basis of Morality
17. The Divine and Human Supports for Justice
18. The Rational Family
19. The "State of Nature"
20. The Rational Commonwealth
21. Rational Freedom and Human Dignity
Conclusion
Notes
Bibliography of Modern Works Cited
Index