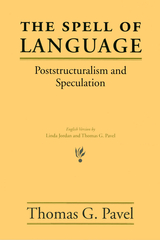 The Spell of Language: Poststructuralism and Speculation
by Thomas G. Pavel
translated by Linda Jordan
University of Chicago Press, 2001
Paper: 978-0-226-65067-8
Originally published as Le Mirage linguistique, this book remains the definitive study of the role of linguistics in structuralism and poststructuralism. Thomas Pavel examines recent French thought through the work of luminaries such as Lévi-Strauss, Lacan, Foucault, and Derrida. The "spell of language" for Pavel consists of three things: the promise that linguistics seemed to represent for the humanities and social sciences; the distortions, misunderstandings, and willful neglect incumbent upon the "linguistic turn"; and, above all, the break with traditional humanism. He isolates three modes of thought-moderate structuralism, scientific structuralism, and speculative structuralism-and shows how even as they diverge from each other, they all advocate an antihumanist point of view.

In this spirited book, Pavel shows that structuralism's flawed use of linguistic theory has rendered hollow the philosophical core of a whole generation of work in the human sciences.

AUTHOR BIOGRAPHY
Thomas G. Pavel is a professor in and chair of the Department of Romance Languages at the University of Chicago. He is the author of several previous books, both fiction and nonfiction, in English, French, and Romanian.
TABLE OF CONTENTS


Preface
1. The Order of Language
2. Technology and Regression
3. The Transcendental Ties of Linguistics
4. Games of Dispersion and the Correspondence Fallacy
5. On Conventionalism in Poetics
6. On Discretionary Intellectual Behaviour
Post-Scriptum: The Heidegger Affair
Notes
References
Index