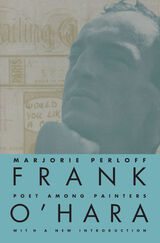 Frank O'Hara: Poet Among Painters
by Marjorie Perloff
University of Chicago Press, 1997
Paper: 978-0-226-66059-2
Drawing extensively upon the poet's unpublished manuscripts—poems, journals, essays, and letters—as well as all his published works, Marjorie Perloff presents Frank O'Hara as one of the central poets of the postwar period and an important critic of the visual arts. Perloff traces the poet's development through his early years at Harvard and his interest in French Dadaism and Surrealism to his later poems that fuse literary influence with elements from Abstract Expressionist painting, atonal music, and contemporary film. This edition contains a new Introduction addressing O'Hara's homosexuality, his attitudes toward racism, and changes in poetic climate cover the past few decades.

"A groundbreaking study. [This book] is a genuine work of criticism. . . . Through Marjorie Perloff's book we see an O'Hara perhaps only his closer associates saw before: a poet fully aware of the traditions and techniques of his craft who, in a life tragically foreshortened, produced an adventurous if somewhat erratic body of American verse."—David Lenson, Chronicle of Higher Education

"Perloff is a reliable, well-informed, discreet, sensitive . . . guide. . . . She is impressive in the way she deals with O'Hara's relationship to painters and paintings, and she does give first-rate readings of four major poems."—Jonathan Cott, New York Times Book Review
TABLE OF CONTENTS


Acknowledgments
Introduction
Preface
1. The Aesthetic of Attention
2. The Early Years (1946-53)
3. Poet Among Painters
4. In Favor of One's Time (1954-61)
5. The Pillar of Our Deaths
Notes
Bibliographical Note
Index