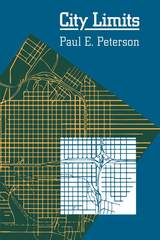 Winner of the 1981 Woodrow Wilson Foundation Award for the best book published in the United States on government, politics, or international affairs.

"City Limits radically reinterprets urban politics by deriving its dominant forces from the logic of the American federal structure. It is thereby able to explain some pervasive tendencies of urban political outcomes that are puzzling or scarcely noticed at all when cities are viewed as autonomous units, outside the federal framework. Professor Peterson's analysis is imaginativelyfor conceived and skillfully carried through. His beautifully finished volume will lastingly alter our understanding of urban affairs in America."—from the citation by the selection committee for the Woodrow Wilson Foundation Award
AUTHOR BIOGRAPHY
Paul E. Peterson is professor of Government at Harvard University. He is the coauthor of Race and Authority in Urban Politics and the author of School Politics, Chicago Style and The Politics of School Reform, 1870-1940. All are published by the University of Chicago Press.
TABLE OF CONTENTS