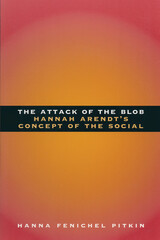 "The European intellectual Hannah Arendt worried about the tendency of social structures to take on a life of their own and paralyze individual action. Pitkin . . . is determined to trace our problems to the actions of individuals. This book is thus a battle of wits. . . . [A] vivid sketch of the conflict between two basic outlooks."—Library Journal

"[O]ne leaves this book feeling enriched and challenged. Pitkin prompts us to rethink our understanding of Arendt and to demythologize the pervasive sense of political helplessness Arendt herself sought so hard to articulate. . . . [A] cause for celebration."—Peter Baehr, Times Literary Supplement

"[Arendt] is certainly among the most original and outstanding political theorists of the twentieth century. . . . It is difficult to imagine a hostile critic examining more effectively than Pitkin . . . Arendt's concept of the social, for hostility would inhibit the acquisition of the mastery of Arendt's texts that Pitkin displays at every turn."—Peter Berkowitz, New Republic
AUTHOR BIOGRAPHY
Hanna Fenichel Pitkin is a professor emerita of political science at the University of California, Berkeley, and the author of The Concept of Representation, Fortune is a Woman, and Wittgenstein and Justice. She is a member of the American Academy of Arts and Sciences.
TABLE OF CONTENTS


Acknowledgments
1: The Problem of the Blob
2: Jewish Assimilation: The Pariah and the Parvenu
3: Biographical Interlude: Philosophy, Love, Exile
4: The Refugee as Parvenu and the Conscious Pariah
5: The Birth of the Blob
6: Writing The Human Condition
7: Absent Authorities: Tocqueville and Marx
8: Abstraction, Authority, and Gender
9: The Social in The Human Condition
10: Excising the Blob
11: Why the Blob?
12: Rethinking "the Social"
Notes
Bibliography
Index