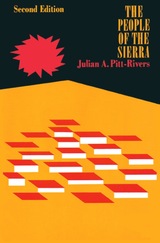 The People of the Sierra presents an engrossing account of the social structure of a rural community in Andalusia, the mountainous region of southern Spain. The author applies the principles of social anthropology, without recourse to jargon, to determine the nature of the leaders of a European peasant society—the mayor, doctor, lawyer, priest—and also the smugglers, bandits, "witches," and gypsies who live on the fringe.

For his second edition of The People of the Sierra Julian A. Pitt-River has unmasked the village of Grazalema which had been protectively cloaked in pseudonym for the original version. In addition he has added a new preface which elaborates upon his earlier theories on norms, values, and social structure, and reconsiders them in the light of current theories of other social scientists.

Because of its unique and penetrating observations, not only Hispanic, Mediterranean, and European but also Latin American scholars regard this book as one of the foundation stones of contemporary cultural studies in several disciplines. Beyond the significance of its substance and theory, this study has considerable merit as a humane work of subtle perception and artful execution.
TABLE OF CONTENTS