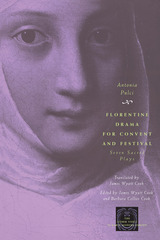 A talented poet and a gifted dramatist, Antonia Pulci (1452-1501) pursued two vocations, first as a wife and later as founder of an Augustinian order. During and after her marriage, Pulci authored several sacre rappresentazioni—one-act plays on Christian subjects. Often written to be performed by nuns for female audiences, Pulci's plays focus closely on the concerns of women. Exploring the choice that Renaissance women had between marriage, the convent, or uncloistered religious life, Pulci's female characters do not merely glorify the religious life at the expense of the secular. Rather, these women consider and deal with the unwanted advances of men, negligent and abusive husbands and suitors, the dangers of childbearing, and the disappointments of child rearing. They manage households and kingdoms successfully. Pulci's heroines are thoughtful; their capacity for analysis and action regularly resolve the moral, filial, and religious crises of their husbands and admirers.

Available in English for the first time, this volume recovers the long muted voice of an early and important female Italian poet and playwright.
TABLE OF CONTENTS