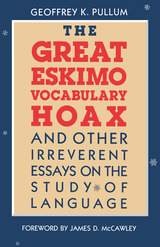 How reliable are all those stories about the number of Eskimo words for snow? How can lamps, flags, and parrots be libelous? How might Star Trek's Commander Spock react to Noam Chomsky's theories of language? These and many other odd questions are typical topics in this collection of essays that present an occasionally zany, often wry, but always fascinating look at language and the people who study it.

Geoffrey K. Pullum's writings began as columns in Natural Language and Linguistic Theory in 1983. For six years, in almost every issue, under the banner "TOPIC. . .COMMENT," he published a captivating mélange of commentary, criticism, satire, whimsy, and fiction. Those columns are reproduced here—almost exactly as his friends and colleagues originally warned him not to publish them—along with new material including a foreword by James D. McCawley, a prologue, and a new introduction to each of these clever pieces. Whether making a sneak attack on some sacred cow, delivering a tongue-in-cheek protest against current standards, or supplying a caustic review of some recent development, Pullum remains in touch with serious concerns about language and society. At the same time, he reminds the reader not to take linguistics too seriously all of the time.

Pullum will take you on an excursion into the wild and untamed fringes of linguistics. Among the unusual encounters in store are a conversation between Star Trek's Commander Spock and three real earth linguists, the strange tale of the author's imprisonment for embezzling funds from the Campaign for Typographical Freedom, a harrowing account of a day in the research life of four unhappy grammarians, and the true story of how a monograph on syntax was suppressed because the examples were judged to be libelous. You will also find a volley of humorous broadsides aimed at dishonest attributional practices, meddlesome copy editors, mathematical incompetence, and "cracker-barrel philosophy of science." These learned and witty pieces will delight anyone who is fascinated by the quirks of language and linguists.
AUTHOR BIOGRAPHY
Geoffrey K. Pullum is professor of linguistics at the University of California at Santa Cruz.
TABLE OF CONTENTS


Foreword, by James D. McCawley
1. Prologue: The TOPIC... COMMENT column
Part I - Fashions and Tendencies
2. Watch out for the current
3. The stranger in the bar
4. If it's Tuesday, this must be glossematics
5. The conduct of Linguistic Inquiry
6. Chomsky on the Enterprise
7. Formal linguistics meets the Boojum
Part II - Publication and Damnation
8. Stalking the perfect journal
9. Punctuation and human freedom
10. A guest of the State
11. Seven deadly sins in journal publishing
12. The linguistics of defamation
13. Trench-mouth comes to Trumpington Street
14. Here come the linguistic fascists
Part III - Unscientific Behavior
15. The revenge of the methodological moaners
16. Footloose and context-free
17. Nobody goes around at LSA meetings offering odds
18. Citation etiquette beyond Thunderdome
19. The great Eskimo vocabulary hoax
Part IV - Linguistic Fantasies
20. No trips to Stockholm
21. A memo from the Vice Chancellor
22. Some lists of things about books
23. The incident of the node vortex problem
24. Epilogue: The final curtain
Appendix: Original publication details
and acknowledgments
Index