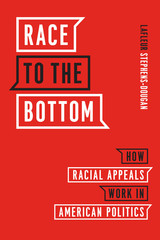 African American voters are a key demographic to the modern Democratic base, and conventional wisdom has it that there is political cost to racialized “dog whistles,” especially for Democratic candidates. However, politicians from both parties and from all racial backgrounds continually appeal to negative racial attitudes for political gain.

Challenging what we think we know about race and politics, LaFleur Stephens-Dougan argues that candidates across the racial and political spectrum engage in “racial distancing,” or using negative racial appeals to communicate to racially moderate and conservative whites—the overwhelming majority of whites—that they will not disrupt the racial status quo. Race to the Bottom closely examines empirical data on racialized partisan stereotypes to show that engaging in racial distancing through political platforms that do not address the needs of nonwhite communities and charged rhetoric that targets African Americans, immigrants, and others can be politically advantageous. Racialized communication persists as a well-worn campaign strategy because it has real electoral value for both white and black politicians seeking to broaden their coalitions. Stephens-Dougan reveals that claims of racial progress have been overstated as our politicians are incentivized to employ racial prejudices at the expense of the most marginalized in our society.
AUTHOR BIOGRAPHY
LaFleur Stephens-Dougan is assistant professor in the Department of Politics at Princeton University.

REVIEWS
"Stephens-Dougan lays out a novel theoretical framework for understanding how candidates and politicians might strategically use racial messaging to gain the support of white voters. Departing from earlier research on racial priming, which examined the use of racial messaging primarily by white Republican candidates, Stephens-Dougan argues that the electoral incentives that exist for candidates to engage in racially inflammatory messaging are so great that even candidates of color running in these districts often find racially derogatory campaign appeals effectively. This book makes an important contribution to the study of American political behavior and race and ethnic politics."
— Ismail K. White, Duke University