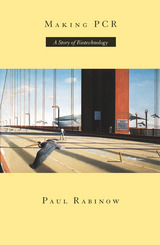 Making PCR is the fascinating, behind-the-scenes account of the invention of one of the most significant biotech discoveries in our time—the polymerase chain reaction. Transforming the practice and potential of molecular biology, PCR extends scientists' ability to identify and manipulate genetic materials and accurately reproduces millions of copies of a given segment in a short period of time. It makes abundant what was once scarce—the genetic material required for experimentation.

Making PCR explores the culture of biotechnology as it emerged at Certus Corporation during the 1980s and focuses on its distinctive configuration of scientific, technical, social, economic, political, and legal elements, each of which had its own separate trajectory over the preceding decade. The book contains interviews with the remarkable cast of characters who made PCR, including Kary Mullin, the maverick who received the Nobel prize for "discovering" it, as well as the team of young scientists and the company's business leaders.

This book shows how a contingently assembled practice emerged, composed of distinctive subjects, the site where they worked, and the object they invented.

"Paul Rabinow paints a . . . picture of the process of discovery in Making PCR: A Story of Biotechnology [and] teases out every possible detail. . . . Makes for an intriguing read that raises many questions about our understanding of the twisting process of discovery itself."—David Bradley, New Scientist

"Rabinow's book belongs to a burgeoning genre: ethnographic studies of what scientists actually do in the lab. . . . A bold move."—Daniel Zalewski, Lingua Franca

"[Making PCR is] exotic territory, biomedical research, explored. . . . Rabinow describes a dance: the immigration and repatriation of scientists to and from the academic and business worlds."—Nancy Maull, New York Times Book Review
TABLE OF CONTENTS