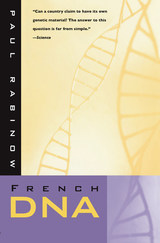 In 1993, an American biotechnology company and a French genetics lab developed a collaborative research plan to search for diabetes genes. But just as the project was to begin, the French government called it to a halt, barring the laboratory from sharing something never previously thought of as a commodity unto itself: French DNA.
AUTHOR BIOGRAPHY
Paul Rabinow is a professor of anthropology at the University of California, Berkeley. He has written numerous books, including Making PCR: A Story of Biotechnology and French Modern: Norms and Forms of the Social Environment, both published by the University of Chicago Press.
TABLE OF CONTENTS