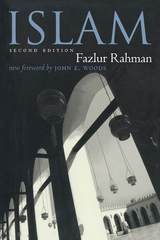 Fazlur Rahman's Islam is aptly titled, in that this slim volume constitutes an incisive and surprisingly comprehensive history and analysis of Islam—its history, its conflicts, its legacy—and its prospects. From Mohammed to the late twentieth century, Rahman traces the development of Islam as a religion and, more importantly, as an intellectual tradition, offering both an easily understood introduction to the faith and an impassioned argument for its future direction.
AUTHOR BIOGRAPHY
Fazlur Rahman (1919-1988) was the Harold H. Swift Distinguished Service Professor of Islamic Thought at the University of Chicago. His many books include Islam and Modernity: Transformation of an Intellectual Tradition and Prophecy in Islam: Philosophy and Orthodoxy, both published by the University of Chicago Press.
TABLE OF CONTENTS

3 ORIGINS AND DEVELOPMENT OF THE TRADITION
Preliminary - The State of Western Scholarship - The Nature of the
Prophet's Authority - Hadith and Sunna, or the Verbal and Practical
Tradition - Classical Opposition to the Health - Development of the
'Science of the Hadith'

4 THE STRUCTURE OF THE LAW
Preliminary - Early Developments: Qur'an and Sunna; Qiyas; Ijma
or Consensus - Al-Shafi'i and After - The Law and the State - For-
mation of the Legal Schools - Conclusion

6 THE SHARI'A
Preliminary - Development of the Concept of Shari'a - The Tradi-
tionalist Reform: Ibn Taymiya - The Shari'a and the Law

14 LEGACY AND PROSPECTS
Faith and History - The Legacy to be Reformulated: The Political
Dogma; The Moral Principles; The Spiritual Ideals - The Present
and the Future