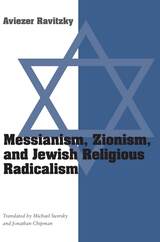 The Orthodox Jewish tradition affirms that Jewish exile will end with the coming of the Messiah. How, then, does Orthodoxy respond to the political realization of a Jewish homeland that is the State of Israel? In this cogent and searching study, Aviezer Ravitzky probes Orthodoxy's divergent positions on Zionism, which range from radical condemnation to virtual beatification.

Ravitzky traces the roots of Haredi ideology, which opposes the Zionist enterprise, and shows how Haredim living in Israel have come to terms with a state to them unholy and therefore doomed. Ravitzky also examines radical religious movements, including the Gush Emunim, to whom the State of Israel is a divine agent. He concludes with a discussion of the recent transformation of Habad Hassidism from conservatism to radical messianism.

This book is indispensable to anyone concerned with the complex confrontation between Jewish fundamentalism and Israeli political sovereignty, especially in light of the tragic death of Israeli Prime Minister Yitzhak Rabin.
TABLE OF CONTENTS