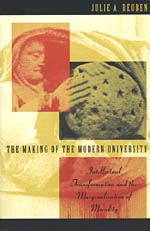 What is the purpose of higher education, and how should we pursue it? Debates over these issues raged in the late nineteenth century as reformers introduced a new kind of university—one dedicated to free inquiry and the advancement of knowledge. In the first major study of moral education in American universities, Julie Reuben examines the consequences of these debates for modern intellectual life.

Based on extensive research at eight universities—Harvard, Yale, Columbia, Johns Hopkins, Chicago, Stanford, Michigan, and California at Berkeley—Reuben examines the aims of university reformers in the context of nineteenth-century ideas about truth. She argues that these educators tried to apply new scientific standards to moral education, but that their modernization efforts ultimately failed. By exploring the complex interaction between institutional and intellectual change, Reuben enhances our understanding of the modern university, the secularization of intellectual life, and the association of scientific objectivity with value-neutrality.
TABLE OF CONTENTS