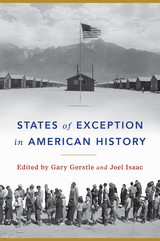 States of Exception in American History brings to light the remarkable number of instances since the Founding in which the protections of the Constitution have been overridden, held in abeyance, or deliberately weakened for certain members of the polity. In the United States, derogations from the rule of law seem to have been a feature of—not a bug in—the constitutional system.

The first comprehensive account of the politics of exceptions and emergencies in the history of the United States, this book weaves together historical studies of moments and spaces of exception with conceptual analyses of emergency, the state of exception, sovereignty, and dictatorship. The Civil War, the Great Depression, and the Cold War figure prominently in the essays; so do Francis Lieber, Frederick Douglass, John Dewey, Clinton Rossiter, and others who explored whether it was possible for the United States to survive states of emergency without losing its democratic way. States of Exception combines political theory and the history of political thought with histories of race and political institutions. It is both inspired by and illuminating of the American experience with constitutional rule in the age of terror and Trump.
AUTHOR BIOGRAPHY
Gary Gerstle is the Paul Mellon Professor of American History at the University of Cambridge and the author of several books, including American Crucible and Liberty and Coercion. Joel Isaac is associate professor of social thought in the John U. Nef Committee on Social Thought at the University of Chicago. He is the author of In Working Knowledge and coeditor of The Worlds of American Intellectual History.

REVIEWS
“States of Exception in American History offers a refined introduction to the problems of ‘emergency’ in liberal states. This volume is the first to combine theory and history in such a compelling fashion.”
— Benjamin A. Coates, Wake Forest University

“Gerstle and Isaac have brought together an excellent collection. There is no doubt of the importance of examining how democracies face emergencies nor is there doubt about the quality of the examinations these contributors provide.”
— Sanford Levinson, University of Texas

“After September 11, 2001, many reacquainted themselves with political discourses back to Rome that deployed but limited emergency authorities, while others reread twentieth-century German theorist Carl Schmitt, notorious for his claim that the power to rule in exceptional times shadows governance in ordinary ones. This rich and unprecedented collection recovers American traditions of engaging emergencies long before the last two decades dawned, Donald Trump came to power, and global pandemic struck. Assembling historical case studies and theoretical reflections, Gary Gerstle and Joel Isaac have achieved something intellectually superb and uncommonly cohesive. No one could deny its contemporary relevance; no one knows where new national emergencies are taking Americans next.”
— Samuel Moyn, Yale University

"This collection of essays, edited by historians Gary Gerstle of the University of Cambridge and Joel Isaac of the University of Chicago, makes timely reading as America looks to repair its democracy from the constitutional ravages of the Trump era. This book is useful not just for gauging how far Trump may have strayed from the United States’ professed legal norms, but also for situating the past four years in a longer-term historical perspective. . . . richly rewarding."
— Survival: Global Politics and Strategy

Part One: The Challenge of Carl Schmitt

1 What Is the State of Exception?
Nomi Claire Lazar

2 Negotiating the Rule of Law: Dilemmas of Security and Liberty Revisited
Ewa Atanassow and Ira Katznelson

3 Beyond the Exception
David Dyzenhaus

5 To Save the Country: Reason and Necessity in Constitutional Emergencies
John Fabian Witt

6 Powers of War in Times of Peace: Emergency Powers in the United States after the End of the Civil War
Gregory P. Downs

7 Was There an American Concept of Emergency Powers? John Dewey, Carl Schmitt, and the Democratic Politics of Exception
Stephen W. Sawyer

8 Charles Merriam and the Search for Democratic Power After Sovereignty
James T. Sparrow

10 Frederick Douglass and Constitutional Emergency: An Homage to the Political Creativity of Abolitionist Activism
Mariah Zeisberg

11 Delegated Governance as a Structure of Exceptions
Elisabeth S. Clemens