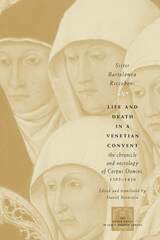 These works by Sister Bartolomea Riccoboni offer an intimate portrait of the women who inhabited the Venetian convent of Corpus Domini, where they shared a religious life bounded physically by the convent wall and organized temporally by the rhythms of work and worship. At the same time, they show how this cloistered community vibrated with news of the great ecclesiastical events of the day, such as the Great Western Schism and the Council of Constance.

While the chronicle recounts the history of the nuns' collective life, the necrology provides highly individualized biographies of nearly fifty women who died in the convent between 1395 and 1436. We follow the fascinating stories that led these women, from adolescent girls to elderly widows, to join the convent; and we learn of their cultural backgrounds and intellectual accomplishments, their ascetic practices and mystical visions, their charity and devotion to each other and their fortitude in the face of illness and death.

The personal and social meaning of religious devotion comes alive in these texts, the first of their kind to be translated into English.