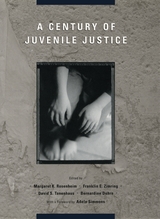 A Century of Juvenile Justice
edited by Margaret K. Rosenheim, Franklin E. Zimring, David S. Tanenhaus and Bernardine Dohrn
University of Chicago Press, 2002
Cloth: 978-0-226-72783-7
Since its inception in Illinois in 1899, the juvenile court has become a remarkable legal and social institution all over the developed world, one that plays a singular role in modern government. At its founding, the juvenile court was intended to reverse longstanding legal traditions, and place the child's interests first in areas of law ranging from dependency to delinquency. Yet in recent years legal responses to youths' offences have undergone striking changes, as more juveniles are being transferred to adult courts and serving adult sentences.

A Century of Juvenile Justice is the first standard, comprehensive and comparative reference work to span the history and current state of juvenile justice. An extraordinary assemblage of leading authorities have produced a accessible, illustrated document, designed as a reference for everyone from probation personnel and police to students, educators, lawyers, and social workers.

Editors' introductions place into context each of the book's five sections, which consider the history of the ideas around which the system was organized and the institutions and practices that resulted; the ways in which this set of institutions and practices interacts with other aspects of government policy toward children in the U.S. and in other nations; and also the ways in which changing social and legal meanings of childhood and youth have continued to influence juvenile justice. The doctrine and institutions of juvenile justice in Europe, Japan, England, and Scotland are profiled in depth to show the range of modern responses to youth crime and child endangerment. This comparative material provides a fresh basis for judging the direction of policy in the U.S.

Franklin E. Zimring is a professor of law and director of the Earl Warren Legal Institute at the University of California, Berkeley.

David S. Tanenhaus is an assistant professor of history and law at the University of Nevada, Las Vegas.

Bernardine Dohrn is an associate clinical professor and director of the Children and Family Justice Center of Northwestern University School of Law.
TABLE OF CONTENTS