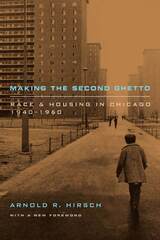 First published in 1983 and praised by the likes of Ta-Nehisi Coates and Thomas Sugrue, Arnold R. Hirsch’s Making the Second Ghetto is the rare book that has only become more piercingly prescient over the years.

Hirsch’s classic and groundbreaking work of urban history is a revelatory look at Chicago in the decades after the Great Depression, a period when the city dealt with its rapidly growing Black population not by working to abolish its stark segregation but by expanding and solidifying it. Even as the civil rights movement rose to prominence, Chicago exploited a variety of methods of segregation—including riots, redevelopment, and a host of new legal frameworks—that provided a national playbook for the emergence of a new kind of entrenched inequality. Hirsch’s chronicle of the strategies employed by ethnic, political, and business interests in reaction to the Great Migration of Southern Blacks in the mid-twentieth century makes startingly clear how the violent reactions of an emergent white population found common ground with policy makers to segregate first a city and then the nation.

This enlarged edition of Making the Second Ghetto features a visionary afterword by historian N. D. B. Connolly, explaining why Hirsch’s book still crackles with “blistering relevance” for contemporary readers.
AUTHOR BIOGRAPHY
Arnold R. Hirsch (1949–2018) was the Ethel and Herman L. Midlo Endowed Chair for New Orleans Studies at the University of New Orleans and coeditor of Urban Policy in Twentieth-Century America and Creole New Orleans: Race and Americanization. N. D. B. Connolly is the Herbert Baxter Adams Associate Professor of History at Johns Hopkins University and the author of A World More Concrete: Real Estate and the Remaking of Jim Crow South Florida, published by the University of Chicago Press.
REVIEWS
“Arnold Hirsch’s deeply transformational book lays out how a perfect storm of racism, redlining, and public policies formed Chicago and other American cities. If you want to understand what came after the 1960s, you have to understand what came before them. And today we’re still dealing with the same issues Hirsch wrote about. Every sector of the city—its business interests, its government, its people, and sometimes even its churches—have employed particular weaponry to effect a single goal: the subjugation of black people. It hasn’t changed.”
— Ta-Nehisi Coates, author of We Were Eight Years In Power and Between the World and Me

1 The second ghetto and the dynamics of neighborhood change

2 An era of hidden violence

4 The Loop versus the slums: downtown strikes back

5 A neighborhood on a hill: Hyde Park and the University of Chicago

6 Divided we stand: white unity and the color line at midcentury

Epilogue: Chicago and the nation

Afterword to the 2021 edition