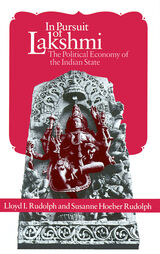 The pursuit of Lakshmi, the fickle goddess of prosperity and good fortune, is a metaphor for the aspirations of the state and people of independent India. In the latest of their distinguished contributions to South Asian studies, scholars Lloyd I. Rudolph and Susanne Hoeber Rudolph focus on this modern-day pursuit by offering a comprehensive analysis of India's political economy.

India occupies a paradoxical plane among nation states: it is both developed and underdeveloped, rich and poor, strong and weak. These contrasts locate India in the international order. The Rudolphs' theory of demand and command polities provides a general framework for explaining the special circumstances of the Indian experience.

Contrary to what one might expect in a country with great disparities of wealth, no national party, right or left, pursues the politics of class. Instead, the Rudolphs argue, private capital and organized labor in India face a "third actor"—the state. Because of the dominance of the state makes class politics marginal, the state is itself an element in the creation of the centrist-oriented social pluralism that has characterized Indian politics since independence.

In analyzing the relationship between India's politics and its economy, the Rudolphs maintain that India's economic performance has been only marginally affected by the type of regime in power—authoritarian or democratic. More important, they show that rising levels of social mobilization and personalistic rule have contributed to declining state capacity and autonomy. At the same time, social mobilization has led to a more equitable distribution of economic benefits and political power, which has enhanced the state's legitimacy among its citizens.