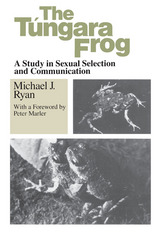 In a Panamanian pond, male túngara frogs (Physalaemus pustulosus) gather in choruses, giving their "advertisement" call to the females that move among them. If a female chooses to make physical contact with a male, he will clasp her and eventually fertilize her eggs. But in vying for the females, the males whose calls are most attractive may also attract the interest of another creature: the fringe-lipped bat, a frog eater.

In the Túngara Frog, the most detailed and informative single study available of frogs and their reproductive behavior, Michael J. Ryan demonstrates the interplay of sexual and natural selection. Using techniques from ethology, behavioral ecology, sensory physiology, physiological ecology, and theoretical population genetics in his research, Ryan shows that large males with low-frequency calls mate most successfully. He examines in detail a number of explanations for the females' preferences, and he considers possible evolutionary forces leading to the males' success.

Though certain vocalizations allow males to obtain mates and thus should be favored by sexual selection, this study highlights two important costs of such sexual displays: the frogs expand considerable energy in their mating calls, and they advertise their whereabouts to predators. Ryan considers in detail how predators, especially the frige-lipped bat (Trachops cirrhosus), affect the evolution of the túngara frog's calls.
TABLE OF CONTENTS