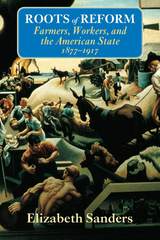 Roots of Reform offers a sweeping revision of our understanding of the rise of the regulatory state in the late nineteenth century. Sanders argues that politically mobilized farmers were the driving force behind most of the legislation that increased national control over private economic power. She demonstrates that farmers from the South, Midwest, and West reached out to the urban laborers who shared their class position and their principal antagonist—northeastern monopolistic industrial and financial capital—despite weak electoral support from organized labor.

Based on new evidence from legislative records and other sources, Sanders shows that this tenuous alliance of "producers versus plutocrats" shaped early regulatory legislation, remained powerful through the populist and progressive eras, and developed a characteristic method of democratic state expansion with continued relevance for subsequent reform movements.

Roots of Reform is essential reading for anyone interested in this crucial period of American political development.
TABLE OF CONTENTS


Contents
1. Introduction
Part 1: The Political Economy
2. Core and Periphery in the American Economy
3. Labor Organizations and the State, 1873-1912
4. Farmers in Politics, 1872-1896
5. Agrarian Politics and Parties after 1896
Part 2: The Agrarian Statist Agenda
6. The Transportation System
7. Trade, Taxation, Banking, and Credit
8. Antitrust and the Structure of the Marketing Network
9. Federal Aid for Practical Education: Farmers First
10. The Labor Program of the Farmers' Party
11. Farmers, Workers, and the Administrative States
12. Conclusion
Notes
Index