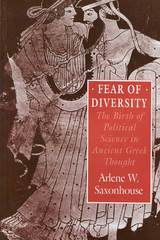 This wide-ranging book locates the origin of political science in the everyday world of ancient Greek life, thought, and culture. Arlene Saxonhouse contends that the Greeks, confronted by the puzzling diversity of the physical world, sought a force that would unify, constrain, and explain it. This drive toward unity did more than value the mind over the senses: it led the Greeks to play down the very real complexities—particularly regarding women, the family, and sexuality—in both their political and personal lives.

Saxonhouse opens up fresh understandings of such issues as the Greeks' fear of the feminine and their attempts to ignore the demands that gender, reproduction, and the family inevitably make on the individual.
TABLE OF CONTENTS


Preface
Acknowledgments
1: A Tragicomic Prelude: Aristophanes' Ecclesiazusae
Women and Men
Public and Private
The Ugly and the Beautiful
2: The Pre-Socratic Challenge
Thales and Anaximander
Heraclitus: The Philosopher Who Laughed
The Truth According to Parmenides
3: Women and the Tragic Denial of Difference: Three Versions
Aeschylus's Seven against Thebes
Sophocles' Antigone
Euripides' Ion
4: Socrates and the City of Athens
The Education of Euthyphro
Melerus and the City's Defence of Unity
The Laws Speak
5: Autochthony and Unity in the Menexenus and Statesman
Aspasia: The Birth of a City and the Death of Its Citizens
The Statesman: A Retelling of Parmenides' Voyage
6: Callipolis: Socrates' Escape from Tragedy
The Politics of Interpretation: Poetry and Narration in Callipolis
The Politics of "What Is"
7: Plato's Symposium: A Reassessment of Callipolis
Aristophanes' Speech and the Net of Hephaestus
Socrates' Speech and the Unity of Male and Female
Alcibiades' Speech: Marsyas, the Sirens, and the Allure of Socrates
8: The Challenge of the Family
Bk. 1: The Family Is Not an Individual
Bk. 2: The City Is Not a Family
9: The Study of Politics: Unity Out of Diversity
The Unity of Parts
The Limits of Unity
Epilogue
Bibliography
Index