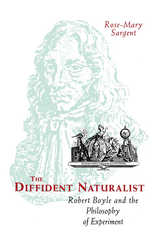 In a provocative reassessment of one of the quintessential figures of early modern science, Rose-Mary Sargent explores Robert Boyle's philosophy of experiment, a central aspect of his life and work that became a model for mid- to late seventeenth-century natural philosophers and for many who followed them.

Sargent examines the philosophical, legal, experimental, and religious traditions—among them English common law, alchemy, medicine, and Christianity—that played a part in shaping Boyle's experimental thought and practice. The roots of his philosophy in his early life and education, in his religious ideals, and in the work of his predecessors—particularly Bacon, Descartes, and Galileo—are fully explored, as are the possible influences of his social and intellectual circle. Drawing on the full range of Boyle's published works, as well as on his unpublished notebooks and manuscripts, Sargent shows how these diverse influences were transformed and incorporated into Boyle's views on and practice of experiment.
AUTHOR BIOGRAPHY
Rose-Mary Sargent is assistant professor of philosophy at Merrimack College.
TABLE OF CONTENTS