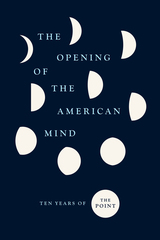 In a cultural landscape dominated by hot takes and petty polemics, The Point stands for something different. Informed by the conviction that humanistic thinking has relevance for everyday life, the magazine has long maintained a rare space for thoughtful dialogue between a wide range of political views, philosophical perspectives, and personal experiences: its contributors include liberals and conservatives, philosophers and activists, Marxists and Catholics, New Yorkers and Midwesterners. A little more than a decade since its founding on the campus of the University of Chicago, it offers a unique and revelatory look at the changing face of America, one that speaks not only to way American minds have been forced to “open” by a decade of trauma and transformation, but also to the challenge of remaining open to our fellow citizens during our deeply divided present.

Featuring award-winning and highly acclaimed essays from The Point’s first ten years, The Opening of the American Mind traces the path of American intellect from the magazine’s inception in 2009, when Barack Obama was ascending the steps of the White House, to the brink of the 2020 election. The essays, chosen both for the way they capture their time and transcend it, are assembled into five sections that address cycles of cultural frustrations, social movements, and the aftermath of the 2016 election, and provide lively, forward-looking considerations of how we might expand our imaginations into the future. Spanning the era of Obama and Trump, Occupy Wall Street and Black Lives Matter, #MeToo and renewed attention to reparations, this anthology offers critical reflections on some of the decade’s most influential events and stands as a testament to the significance of open exchange. The intellectual dialogue provided by The Point has never been more urgently needed, and this collection will bring the magazine’s vital work to an even broader readership.
AUTHOR BIOGRAPHY
The Point is a Chicago-based magazine of philosophical writing on contemporary life and culture. Founded by three graduate students at the University of Chicago in 2009, it has become a nationally recognized home for today’s most thought-provoking essays, criticism and intellectual journalism.

REVIEWS
“The Point is unique among the intellectual journals of our time in its genuine openness to a range of perspectives, and its commitment to pluralism reflects a conviction that thought cuts deepest when it is permitted to find its own path. The essays in this volume are without exception lucid, striking, intelligent, and well argued; they are also idiosyncratic, surprising, and original. I don’t always agree with each author, but I leave each piece having learned something new.”
— Michael Clune, author of Gamelife: A Memoir

“It is no exaggeration to say that intellectual discourse in America is in a state of crisis, assaulted on both sides by the anti-intellectual and the overcorrecting. What we need is clear and rigorous public thinking capable of rendering our chaotic society and each other more legible. What we often get instead is tribal posturing, clichés of thought and language meant to signal neither openness nor generosity but conformity. This is why I am so grateful a venue as brilliantly multifaceted and fearless as The Point is celebrating its first decade of intellectual stewardship. The American mind remains open.”
— Thomas Chatterton Williams, author of Self-Portrait in Black and White

The End of the End of History

No Such Thing?
Jonny Thakkar

Who Will Pay Reparations on My Soul?
Jesse McCarthy

Letter on Our President
The Editors

I Am Madame Bovary
Anastasia Berg

This, Too, Was History
Peter C. Baker

The Dictatorship of the Present
John Michael Colón