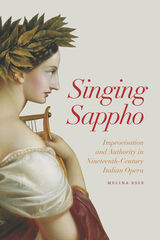 From the theatrical stage to the literary salon, the figure of Sappho—the ancient poet and inspiring icon of feminine creativity—played a major role in the intertwining histories of improvisation, text, and performance throughout the nineteenth century. Exploring the connections between operatic and poetic improvisation in Italy and beyond, Singing Sappho combines earwitness accounts of famous female improviser-virtuosi with erudite analysis of musical and literary practices. Melina Esse demonstrates that performance played a much larger role in conceptions of musical authorship than previously recognized, arguing that discourses of spontaneity—specifically those surrounding the improvvisatrice, or female poetic improviser—were paradoxically used to carve out a new authority for opera composers just as improvisation itself was falling into decline. With this novel and nuanced book, Esse persuasively reclaims the agency of performers and their crucial role in constituting Italian opera as a genre in the nineteenth century.
AUTHOR BIOGRAPHY
Melina Esse is associate professor of musicology at the Eastman School of Music, University of Rochester.
REVIEWS
“With her perceptive readings, Esse illuminates the role of the improvvisatrice in nineteenth-century opera and the musical dimensions of improvisation. Revealing that nineteenth-century authorship was a fluid combination of creative, performative, collaborative, and contingent elements, she challenges an accepted narrative about the increasing dominance of the written work and the composer’s authority. This fascinating study is deeply relevant to literary-cultural studies as well as to musicology.”
— Angela Esterhammer, University of Toronto

“Esse’s new book makes a vital contribution to the continuing debates surrounding nineteenth-century Italian opera: it offers us important new ways of looking at the repertory and will surely take its place among the very best of recent operatic scholarship.”
— Roger Parker, King’s College London

“Esse argues brilliantly that the relationship between written and oral traditions is far more complicated than has hitherto been acknowledged. Her approach to this subject matter is unique, tracing the figure of Sappho, an ‘iconic improviser,’ through a series of operas and narratives. This book adds critical new perspective to the field of opera studies, illuminating how prima donnas helped shape and ‘create’ the musical and artistic environment in which they worked.”
— Hilary Poriss, Northeastern University

Chapter 3    Divinely Inspired: Incantation and the Making of Melody in Bellini’s Norma

Chapter 5     A Sapphic Orpheus: Pauline Viardot and the Sexual Politics of Operatic Collaboration