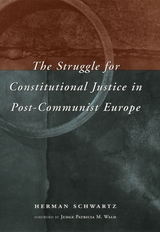 In the former Eastern Bloc countries, one of the most difficult and important aspects of the transition to democracy has been the establishment of constitutional justice and the rule of law. Herman Schwartz's wide-ranging book, backed with rich historical detail and a massive array of research, is the first to chronicle and analyze the rise and troubles of constitutional courts in this changing region.

"Those who are interested in understanding the behavior of constitutional courts in transitional regimes cannot afford to ignore this important book. . . . [It] is fecund with hypotheses of interest to political scientists, and we are indebted to Professor Schwartz for his comprehensive analysis."—James L. Gibson, Law and Politics Book Review
AUTHOR BIOGRAPHY
Herman Schwartz is professor of politics at the University of Virginia.
TABLE OF CONTENTS