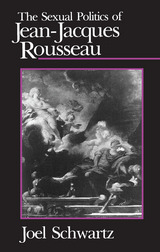 Joel Schwartz presents the first systematic treatment of Rousseau's understanding of the political importance of women, sexuality, and the family. Using both Rousseau's lesser-known literary works and such major writings as Emile, Julie, and The Second Discourse, he offers an original and provocative presentation of Rousseau's argument. To read Rousseau, Schwartz believes, is to enter into a profound discourse about the meaning of sexual equality and the opportunities, pitfalls, costs, and benefits that sexual relationships bestow and impose on us all. His own thoughtful reading of Rousseau opens up fresh perspectives on political philosophy and the history of sexual, masculine, and feminine psychology.
AUTHOR BIOGRAPHY
Joel Schwartz is assistant professor of political science at the University of Michigan.
TABLE OF CONTENTS