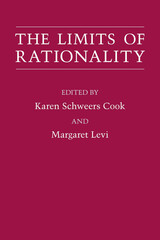 Prevailing economic theory presumes that agents act rationally when they make decisions, striving to maximize the efficient use of their resources. Psychology has repeatedly challenged the rational choice paradigm with persuasive evidence that people do not always make the optimal choice. Yet the paradigm has proven so successful a predictor that its use continues to flourish, fueled by debate across the social sciences over why it works so well.

Intended to introduce novices to rational choice theory, this accessible, interdisciplinary book collects writings by leading researchers. The Limits of Rationality illuminates the rational choice paradigm of social and political behavior itself, identifies its limitations, clarifies the nature of current controversies, and offers suggestions for improving current models.

Emphasizing analyses of norms and institutions, the second and third sections of the book investigate areas in which rational choice theory might be extended in order to provide better models. The contributors evaluate the adequacy of analyses based on neoclassical economics, the potential contributions of game theory and cognitive science, and the consequences for the basic framework when unequal bargaining power and hierarchy are introduced.
TABLE OF CONTENTS