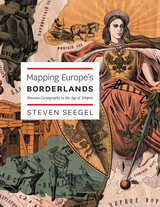 The simplest purpose of a map is a rational one: to educate, to solve a problem, to point someone in the right direction. Maps shape and communicate information, for the sake of improved orientation. But maps exist for states as well as individuals, and they need to be interpreted as expressions of power and knowledge, as Steven Seegel makes clear in his impressive and important new book.
Mapping Europe’s Borderlands takes the familiar problems of state and nation building in eastern Europe and presents them through an entirely new prism, that of cartography and cartographers. Drawing from sources in eleven languages, including military, historical-pedagogical, and ethnographic maps, as well as geographic texts and related cartographic literature, Seegel explores the role of maps and mapmakers in the East Central European borderlands from the Enlightenment to the Treaty of Versailles. For example, Seegel explains how Russia used cartography in the aftermath of the Napoleonic Wars and, later, formed its geography society as a cover for gathering intelligence. He also explains the importance of maps to the formation of identities and institutions in Poland, Ukraine, and Lithuania, as well as in Russia. Seegel concludes with a consideration of the impact of cartographers’ regional and socioeconomic backgrounds, educations, families, career options, and available language choices.
AUTHOR BIOGRAPHY
Steven Seegel is assistant professor of history at the University of Northern Colorado. He is the author of Ukraine under Western Eyes.

REVIEWS
“No one has approached the history of East European cartography with greater dedication, energy, and scholarly objectivity than Steven Seegel. This imposing work will prove indispensable in years and decades to come for anyone who wishes to understand the historical relationship between constructions of place and power.”
— Timothy Snyder, Yale University

“Steven Seegel has written a fascinating and important work on the significance of maps and cartography for understanding the history of Eastern Europe. He demonstrates with detailed erudition the social and political implications of mapping, challenges us to rethink basic preconceptions about European space, and illuminates the complexities of the terrain in Europe’s borderlands. This is essential reading for scholars working on Russia and Eastern Europe.”
— Larry Wolff, New York University

“Knowledge is power and maps project a vision of ‘objective knowledge’ over a territory. Steven Seegel’s Mapping Europe’s Borderlands applies this dictum to the ethnically and religiously diverse lands once forming part of the early modern Polish Commonwealth. Seegel’s book, combining insights from geography, cartography, critical theory, and history, provides us with a means of seeing this territory through the lens of nineteenth-century mapmakers.”
— Theodore R. Weeks, Southern Illinois University

“Mapping Europe’s Borderlands examines the critical role of maps in the making of Eastern Europe. In this highly innovative study, Steven Seegel uses maps to offer a new, complex, and highly convincing view of the wars, revolutions, diplomatic relations, and political ideas in this part of the world. A strikingly original story.”
— Roman Szporluk, Harvard University

“Seegel intricately analyzes the cartography of imperial Russia and Poland-Lithuania as the science evolved and historical demands were placed on it. This is a rich and fascinating angle on history enhanced by a bounty of beautiful reproductions. Rare is a book this aesthetically pleasing and intellectually original. Seegel should be congratulated for creating it, and the University of Chicago Press, for producing it.”
— Robert Legvold, Foreign Affairs

“[R]emarkable and compelling. . . . Mapping Europe’s Borderlands is an important book, . . . providing the basis for a fundamental reappraisal of the history of this hugely important area over the past few centuries.”
— Adam Zamoyski, Times Literary Supplement

“[T]his work is underpinned by impressive scholarship. The author has evidently examined hundreds of original maps and associated materials in many libraries and archives across Europe and the United States, has consulted numerous scholars, and appears to have command of several languages.”
— H-Net

“[B]eautifully illustrated. . . . The book is awash in maps of all sorts, some in brilliant color. The sheer number of them cited or explained is remarkable, proving Seegel’s wide-ranging research. He . . . never fails to tell us about the story behind the pictures, giving us a sense of the men who plotted the maps and, in some cases, paid for them with broken lives and careers. . . . Anyone interested in the problems of nationality and geography in the Russian-ruled borderlands of Eastern Europe should read this book.”
— Willard Sunderland, University of Cincinnati, American Historical Review

“Mapping Europe’s Borderlands makes a valuable contribution and offers directions for future research. It is painstakingly researched, bringing together information from sources not only in English, but also in Russian, German, Polish, Ukrainian, Lithuanian, and other languages. It is extensively illustrated. This book should appeal to a broader range of readers of the history of cartography because much of what it reveals about the mapping of Russia, East, and East Central Europe easily is applicable elsewhere in the modern world of empire.”
— Dennis Reinhartz, University of Texas at Arlington, Imago Mundi

“Seegel offers a thoughtful framework by which historians can read maps against the grain, uncovering ideologies related to anthropology, geology, statistics, and numerous other domains of natural knowledge.”
— Michael D. Gordin, Isis

“A rich study of East European and Russian cartography from the Enlightenment to the end of the Paris Peace Conference in 1919. Steven Seegel scrutinizes the scientific and pedagogical value of military, historical, and ethnographic maps, geography textbooks, and cartographic literature in eleven different languages. The result is a detailed work that illuminates how Russia adopted the Enlightenment’s instruments of scientific progress and adapted them into tools of modern governance. . . . By inviting readers to view East European lands through the prism of geographers, Steven Seegel has made a noteworthy contribution to the study of territory and space in Russian and East European history.”
— Kitty Lam, Michigan State University, Slavonica

“The book is not only a real showpiece of the author‘s erudition and brilliant orientation in a vast multilingual literature of the subject, but it is first and foremost a critical contribution to our understanding of the ‘situated messiness’ of east central European borderlands and the place contested cartographies and constructed geographies have played in this region’s historical formation between 1772 and 1919.”

“[Mapping Europe’s Borderlands] will undoubtedly serve as a point of reference for academics in a wide range of disciplines, from anthropology and geography to history and sociology.”
— Gwilym Eades, University of London, Cartographica

“A meticulous analysis of how such a natural science discipline as cartography might be used for political purposes.”
— Ukraina Moderna

“[H]ighly original and noteworthy. . . . Mapping Europe’s Borderlands is an impressive achievement. Seegel proves an erudite guide through the development of cartography in (the northern tier of) East Central Europe. . . . His reading of maps and mapmakers is sensitive and insightful. Seegel has mastered the historiography of a number of fields—cartography and historical geography as well as the history of East Central Europe and Russia. He reads a minimum of a dozen languages. The breadth of the work is admirable. And the book is worth its price for the maps alone, wonderfully reproduced. . . . [T]his reviewer will never see maps in quite the same way again.”
— Patrice Dabrowski, University of Vienna, Polish Review

“A magnificent work and an essential read for all those interested in the history of states and empires in nineteenth- and early twentieth-century east central Europe, in the cartography and geopolitics of territorial struggles, and in the ways in which national and ethnic identities were produced and contested across the region.”
— John Pickles, University of North Carolina at Chapel Hill, Slavic Review

“Impressive and important. . . . Mapping Europe’s Borderlands takes the familiar problems of state and nation building in Eastern Europe and presents them innovatively through the prism of cartography and cartographers. Drawing from cartographic sources in eleven languages, including military, historical-pedagogical, and ethnographic maps, as well as geographic texts and related cartographic literature, Seegel explores the role of maps and mapmakers in the east central European borderlands from the Enlightenment to the Treaty of Versailles. . . . I congratulate Seegel for his outstanding achievement. I am sure that his book will be a starting point for many other researchers and a stimulus for further work on the complex histories of European ethnic, national, and state boundaries and their mapping.”
— Alexey V. Postnikov, Russian Academy of Sciences Institute of the History of Science and Technology, “Sergei I. Vavilov”, AAG Review of Books

“Some scholars of our own day confuse abstraction with mastery and the assertion of power with its presence, dwelling on the projects, gardens, and utopias of the ‘modern’ state. These interpretations are copacetic because we ourselves deal in similar reductions. Seegel is more careful and more interesting, perhaps because the region of his very considerable expertise, Eastern Europe, can be presented neither as an overpoweringly ‘modern’ state nor as an intellectually supine colonial possession of such. . . . No one has taken up the subject of maps and power in Eastern Europe with as much energy and erudition as Seegel, and it is unlikely that anyone who reads his book will believe they can do better.”
— Timothy Snyder, Yale University, Common Knowledge

“A fabulous book and remarkable scholarly accomplishment. Beautifully produced by the University of Chicago and richly illustrated with black and white reproductions and color plate map images, the book has an oddly misleading subtitle if not title, one that understates its scope and achievement. Ranging from the eighteenth century to the Paris Peace Conference of 1919, and considering the lands between Vienna and St. Petersburg, Seegel has written a deeply erudite and richly documented account of cartography as ‘a tool of imperial governance’ and, to a lesser extent, as a counter-imperial vehicle of political protest, and nationalist aspiration.”
— Nationalities Papers: The Journal of Nationalism and Ethnicity

“The study of geography is at last becoming fashionable in Slavic studies, and Steven Seegel’s work will remain one of its best products. . . . His book is a major achievement. I will treasure having it on my shelves, and I am sure I will turn to it very often.”
— John P. LeDonne, Jahrbücher für Geschichte Osteuropas

“In this impressive study of the invention and creation of maps of East Central Europe, Seegel argues for the centrality of state institutions and institutionalized priorities for seeing and categorizing the peoples of this diverse region. . . . Seegel himself is skeptical of the very notion of an empirically verifiable ‘truth’ when it comes to ordering and depicting ethnographically diverse regions. . . . What we can know, and what Seegel has in this book so elegantly described, are the goals and intentions of the map-makers.”
— Bradley D. Woodworth, University of New Haven, Canadian-American Slavic Studies

"Seegel's vast array of source material, and apparent command of several languages, is impressive throughout the book. The book itself is produced to a very high standard and is richly illustrated by seventeen colour plates and numerous greyscale reproductions throughout. . . . Seegel's writing is eloquent and evidently very well researched, making this a valuable contribution to both critical cartography and political geography in the context of Central and Eastern Europe."
— Cartographic Journal: The World of Mapping

8 Borderlands as Modern Homelands? Mapping Ukraine and the Grand Duchy of Lithuania

9 Nationalizing Cartography in the Borderlands before World War I

10 Political Cartography in East Central Europe during World War I
Conclusion: Purposes of Maps in the Borderlands of 1919