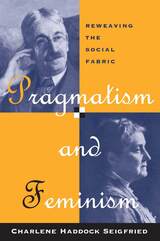 Though many pioneering feminists were deeply influenced by American pragmatism, their contemporary followers have generally ignored that tradition because of its marginalization by a philosophical mainstream intent on neutral analyses devoid of subjectivity. In this revealing work, Charlene Haddock Seigfried effectively reunites two major social and philosophical movements, arguing that pragmatism, because of its focus on the emancipatory potential of everyday experiences, offers feminism its most viable and powerful philosophical foundation.

With careful attention to their interwoven histories and contemporary concerns, Pragmatism and Feminism effectively invigorates both traditions, opening them to new interpretations and appropriations and asserting their timely philosophical relevance. This foundational work in feminist theory simultaneously invites and guides future scholarship in an area of rapidly emerging significance.
TABLE OF CONTENTS