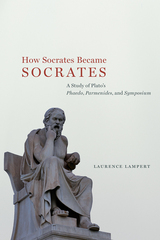 Plato dispersed his account of how Socrates became Socrates across three dialogues. Thus, Plato rendered his becoming discoverable only to readers truly invested. In How Socrates Became Socrates, Laurence Lampert recognizes the path of Plato’s strides and guides us through the true account of Socrates’ becoming. He divulges how and why Plato ordered his Phaedo, Parmenides, and Symposium chronologically to give readers access to Socrates’ development on philosophy’s fundamental questions of being and knowing.

In addition to a careful and precise analysis of Plato’s Phaedo,Parmenides, and Symposium, Lampert shows that properly entwined, Plato’s three dialogues fuse to portray a young thinker entering philosophy’s true radical power. Lampert reveals why this radicality needed to be guarded and places this discussion within the greater scheme of the politics of philosophy.
AUTHOR BIOGRAPHY
Laurence Lampert is professor emeritus of philosophy from Indiana University—Purdue University Indianapolis. He has published several books including Leo Strauss and Nietzsche, How Philosophy Became Socratic: A Study of Plato’s “Protagoras,” “Charmides,” and “Republic,”The Enduring Importance of Leo Strauss, and What a Philosopher Is: Becoming Nietzsche, all with the University of Chicago Press.

Chapter 1. Phaedo: The First Stage of Socrates’ Philosophic Education
Prologue: Heroic Socrates as the New Ideal
1. First Words
2. A New Theseus to Slay the Real Minotaur
3. A New Herakles to Cut Off and Bury the Immortal Head of Hydra
4. A New Odysseus to Teach the Safe Way to Understand Cause
5. Odyssean Socrates’ Report on His Second Sailing in the Phaedo Measured by the Parmenides
6. Odyssean Socrates Ends His Life of Argument
7. Socrates’ Last Words: Gratitude for a Healing

Chapter 2. Parmenides: The Second Stage of Socrates’ Philosophic Education
Prologue: A Socrates for the Philosophically Driven
1. First Words
2. At Pythodorus’s House during the Great Panathenaia
3. Socrates and Zeno: How to Read a Philosophic Writing
4. Socrates’ Solution to What Parmenides and Zeno Made to Seem beyond Us
5. Parmenides the Guide
6. What Is This Gymnastic?
7. Guiding Socrates
8. Last Words
9. The Socratic Turn