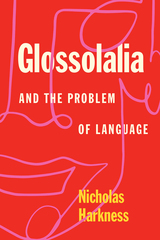 Speaking in tongues, also known as glossolalia, has long been a subject of curiosity as well as vigorous theological debate. A worldwide phenomenon that spans multiple Christian traditions, glossolalia is both celebrated as a supernatural gift and condemned as semiotic alchemy. For some it is mystical speech that exceeds what words can do, and for others it is mere gibberish, empty of meaning. At the heart of these differences is glossolalia’s puzzling relationship to language.
​
Glossolalia and the Problem of Language investigates speaking in tongues in South Korea, where it is practiced widely across denominations and congregations. Nicholas Harkness shows how the popularity of glossolalia in Korea lies at the intersection of numerous, often competing social forces, interwoven religious legacies, and spiritual desires that have been amplified by Christianity’s massive institutionalization. As evangelicalism continues to spread worldwide, Glossolalia and the Problem of Language analyzes one of its most enigmatic practices while marking a major advancement in our understanding of the power of language and its limits.
AUTHOR BIOGRAPHY
Nicholas Harkness is professor of anthropology at Harvard University. He is the author of Songs of Seoul: An Ethnography of Voice and Voicing in Christian South Korea.
REVIEWS
“Glossolalia and the Problem of Language offers an exceedingly rich analysis of glossolalia that can only be produced from a scholar who takes the study of language seriously from within and commands the technics necessary to do it. Brimming with extraordinary depth of insight, Harkness harnesses the materials and methods to consider the limits of denotation without sacrificing fine attention to linguistic form and communicative practice. The result is a multifaceted take on distinguishing aspects of glossolalia.”
— Angie Heo, University of Chicago Divinity School

“Harkness’s scholarship is rigorous and impeccable, his analysis is compelling, and the topic fascinating, with very broad implications. This will be a very important book, particularly for those interested in religion and the nature of language.”
— Webb Keane, University of Michigan

1    Abundance and the Ambivalent Gift

2    The Limits of Language