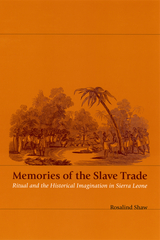 How is the slave trade remembered in West Africa? In a work that challenges recurring claims that Africans felt (and still feel) no sense of moral responsibility concerning the sale of slaves, Rosalind Shaw traces memories of the slave trade in Temne-speaking communities in Sierra Leone. While the slave-trading past is rarely remembered in explicit verbal accounts, it is often made vividly present in such forms as rogue spirits, ritual specialists' visions, and the imagery of divination techniques.

Drawing on extensive fieldwork and archival research, Shaw argues that memories of the slave trade have shaped (and been reshaped by) experiences of colonialism, postcolonialism, and the country's ten-year rebel war. Thus money and commodities, for instance, are often linked to an invisible city of witches whose affluence was built on the theft of human lives. These ritual and visionary memories make hitherto invisible realities manifest, forming a prism through which past and present mutually configure each other.
AUTHOR BIOGRAPHY
Rosalind Shaw is an associate professor of sociocultural anthropology at Tufts University. She is coeditor of Syncretism/Anti-Syncretism: The Politics of Religious Synthesis and Dreaming, Religion and Society in Africa.
TABLE OF CONTENTS