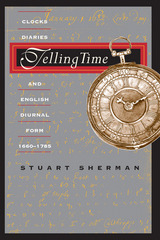 A revolution in clock technology in England during the 1660s allowed people to measure time more accurately, attend to it more minutely, and possess it more privately than previously imaginable. In Telling Time, Stuart Sherman argues that innovations in prose emerged simultaneously with this technological breakthrough, enabling authors to recount the new kind of time by which England was learning to live and work.

Through brilliant readings of Samuel Pepys's diary, Joseph Addison and Richard Steele's daily Spectator, the travel writings of Samuel Johnson and James Boswell, and the novels of Daniel Defoe and Frances Burney, Sherman traces the development of a new way of counting time in prose—the diurnal structure of consecutively dated installments—within the cultural context of the daily institutions which gave it form and motion. Telling Time is not only a major accomplishment for seventeenth- and eighteenth-century literary studies, but it also makes important contributions to current discourse in cultural studies.
TABLE OF CONTENTS


Preface
Acknowledgments
1: Tick, Tick, Tick: Chronometric Innovation and Prose Form
2: "In The Fullness of Time": Pepys and His Predecessors
3: "With My Minute Wach in My Hand": The Diary as Time Keeper
4: "To Print My Self Out": Correspondence and Containment in the Spectator and Its Predecessors
5: Travel Writing and the Dialectic of Diurnal Form
6: Diurnal Dialectic in the Western Islands
7: Defoe and Burney: The Unmaking of the Diurnal in the Making of the Novel
Epilogue
Notes
Index