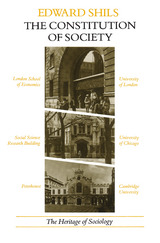 Edward Shils's attempt to work out a macrosociological theory which does justice both to the spiritual and intellectual dispositions and powers of the mind and to the reality of the larger society is an enterprise that has spanned several decades. In his steps toward the development of this theory he has not proceeded deductively; rather he has worked from his own concrete observations of Western, Asian, and African societies. Thus, despite the inevitable abstractness of marcrosociological theory, the papers in this volume—which have been published separately since the Second World War—have a quality of vivid substantiality that makes the theoretical statements they present easier to comprehend.

Professor Shils has attempted to develop a theory that has a place for more than those parts of society that are generated from the biological nature of human beings and those parts that are engendered by the desires of individuals, acting for themselves or for groups and categories of individuals, to maintain and increase their power over other human beings and to secure material goods and services for themselves. He has argued that there are constituents of society in which human beings seek and cultivate connections with objects that transcend those needed to satisfy biological necessity and the desire for material objects and power over others. This third stratum of social existence, he concludes, cannot be reduced to the other two and cannot be disregarded in any serious attempt to understand the function of any society. Thus Edward Shils, without disregarding its many valuable achievements, has nevertheless parted ways with much of modern sociology.

For this collection of papers the author has written an introductory intellectual autobiography that places each essay in the setting of the development of his thought and that connects it with his other writings.
TABLE OF CONTENTS