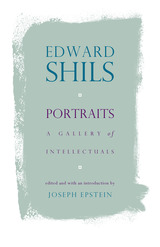 In these vivid portraits of prominent twentieth-century intellectuals, Edward Shils couples the sensitivity of a biographer with the profound knowledge of a highly respected scholar. Ranging as widely across various disciplines as Shils himself did, the essays gathered here share a distaste for faddists who "run with the intellectual mob" and a deep respect for intellectuals who maintain their integrity under great pressure.

Highlights include an affectionate treatment of Leo Szilard, the physicist whose involvement with the development of the atomic bomb led him to work ceaselessly to address its social consequences; a discussion of the educational philosophy of Robert Maynard Hutchins, the University of Chicago's fifth and most controversial president; an appreciative account of the Polish emigré Leopold Labedz's well-informed and outspoken resistance to Communism; and an essay about the extraordinary Indian writer Nirad Chaudhuri.

Many of these essays have appeared in The American Scholar, edited by Joseph Epstein, who introduces this volume with his own portrait of Edward Shils.

"Though professionally a sociologist, Edward Shils was a man of wide cosmopolitan culture and experience, greatly concerned with the public problems of his time: in particular with those created by the rise of new and dangerous ideologies, the frightening possibilities of science, and the apparent abrogation of public responsibility by many Western intellectuals."—Hugh Trevor-Roper