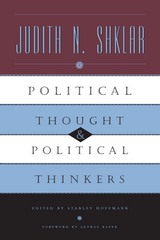 Ethics described Judith Shklar as "a towering presence" at Harvard for decades, an "influential teacher and mentor to many of the best known political theorists working today in the United States." One of this century's most important liberal scholars, she is remembered for her "sharp intellect, forceful personality, and passionate intellectual honesty and curiosity." Political Thought and Political Thinkers makes startlingly clear her role in the reinvigoration of liberal theory that has been taking place over the last two decades.

This second volume of Shklar's work—which follows the 1997 publication of Redeeming American Political Thought—brings together heretofore uncollected (and several unpublished) essays on a number of themes, including the place of the intellect in the modern political world and the dangers of identity politics. While many of these essays have been previously published, they remain far from accessible. In collecting the work scattered over the past forty years in journals and other publications, noted political theorist Stanley Hoffmann provides an essential guide to Shklar's thought, complemented by George Kateb's comprehensive introduction to her work. Hoffmann's selection, which includes Shklar's classic essay "The Liberalism of Fear," showcases her distinctive defense of liberalism and follows her explorations in this history of moral and political thought as she engages with Bergson, Arendt, and Rousseau.

Political Thought and Political Thinkers displays one of the century's most compelling and flexible intellects in action and is the definitive collection of her work on European history and thinkers.

"Shklar's legacy is an inspiring example of liberal thought at its arresting best, unflinchingly courageous and unmoved by the dreary and unmeaning harmonies conjured up by theories of justice and rights."—John Gray, Times Literary Supplement

Judith N. Shklar (1928-1992) was Cowles Professor of Government at Harvard University and the author of nine books in political theory.
TABLE OF CONTENTS


Foreword by George Kateb
Editor's Preface by Stanley Hoffmann
Pt. 1: Learning about Politics
1: The Liberalism of Fear
2: Political Theory and the Rule of Law
3: Obligation, Loyalty, Exile
4: The Bonds of Exile
Pt. 2: Learning about Thought
5: Squaring the Hermeneutic Circle
6: Politics and the Intellect
7: Learning without Knowing
8: Subversive Genealogies
9: The Political Theory of Utopia: From Melancholy to Nostalgia
10: What Is the Use of Utopia?
Pt. 3: Learning about Thinkers
11: Poetry and the Political Imagination in Pope's An Essay on Man
12: Ideology Hunting: The Case of James Harrington
13: Montesquieu and the New Republicanism
14: Reading the Social Contract
15: Jean-Jacques Rousseau and Equality
16: Jean D'Alembert and the Rehabilitation of History
17: Bergson and the Politics of Intuition
18: Nineteen Eighty-Four: Should Political Theory Care?
19: Rethinking the Past
20: Hannah Arendt as Pariah
21: The Work of Michael Walzer
Index