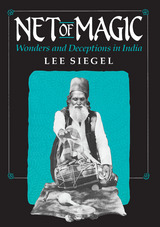 Vast like the subcontinent itself and teeming with outrageous and exotic characters, Net of Magic is an enthralling voyage through the netherworld of Indian magic. Lee Siegel, scholar and magician, uncovers the age-old practices of magic in sacred rites and rituals and unveils the contemporary world of Indian magic of street and stage entertainers.

Siegel's journeys take him from ancient Sanskrit texts to the slums of New Delhi to find remnants of a remarkable magical tradition. In the squalid settlement of Shadipur, he is initiated into a band of Muslim street conjurers and performs as their shill while they tutor him in their con and craft. Siegel also becomes acquainted with Hindu theatrical magicians, who claim descent from court illusionists and now dress as maharajahs to perform a repertoire of tricks full of poignant kitsch and glitz.

Masterfully using a panoply of narrative sleights to recreate the magical world of India, Net of Magic intersperses travelogue, history, ethnography, and fiction. Siegel's vivid, often comic tale is crowded with shills and stooges, tourists and pickpockets, snake charmers and fakirs. Among the cast of characters are Naseeb, a poor Muslim street magician who guides Siegel into the closed circle of itinerant performers; the Industrial Magician, paid by a bank, who convinces his audience to buy traveler's checks by making twenty-rupee notes disappear; the Government Magician, who does a trick with condoms to encourage family planning; P. C. Sorcar, Jr., the most celebrated Indian stage magician; and the fictive Professor M. T. Bannerji, the world's greatest magician, who assumes various guises over a millennium of Indian history and finally arrives in the conjuring capital of the world—Las Vegas.

Like Indra's net—the web of illusion in which Indian performers ensnare their audience—Net of Magic captures the reader in a seductive portrayal of a world where deception is celebrated and lies are transformed into compelling and universal truths.
AUTHOR BIOGRAPHY
Lee Siegel is professor of religion at the University of Hawaii and a member of the International Brotherhood of Magicians. His books include Laughing Matters: Comic Tradition in India, also published by the University of Chicago Press.
TABLE OF CONTENTS