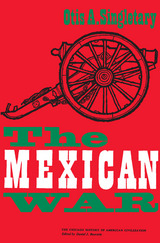 The Mexican War has long been overshadowed in the public imagination by that most popular of all American wars, the Civil War. And it has been swept under the carpet of national conscience as, at worst, a calculated land grab from a neighbor too weak to defend itself.

Otis Singletary's concise, dramatic account of the war that won the Southwest and California for the United States is designed to evoke in modern readers a fresh appreciation of one of the most colorful but neglected episodes in American military affairs—and certainly one of the most significant. Victory in this "military exercise" turned our attention to the Far West, made possible the Gold Rush of '49, and brought vast new territories and new peoples into the Union—altering the face of the nation and greatly influencing its future course.

Mr. Singletary treats the military, political, economic, and diplomatic aspects of the war. He focuses on the ways in which the Mexican War exemplified the dynamic spirit of Manifest Destiny and was a microcosm of peculiarly American—and peculiarly democratic—problems of waging war.

"All in all, this is the best short account of the Mexican War yet written."—T. Harry Williams, The Journal of Modern History


Prologue
I. The Coming of the War
II. The Invasion of Northern Mexico
III. Thrust to the Pacific
IV. To the City of Mexico
V. Politicians and Generals
VI. The Hidden War
VII. The Diplomacy of War
Important Dates
Suggested Reading
Acknowledgments
Index