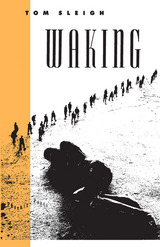 One of our most gifted poets, Sleigh reveals with vigor and delicacy the connections forged between the dead and the living. Waking is a moving narrative of the creation of the self.

". . . . it takes a book like Tom Sleigh's Waking to remind us of all that was most innately stirring and necessary about the confessional insurrection. . . . in Waking Sleigh proves himself worthy of spinning gold thread from the straw of sincerity, elevating his so-called confessions from the merely revealing to the durably revelatory."—David Barber, Poetry

"[Sleigh] is a consummate stylist whose formal control and exploitation of convention is graceful and calm. And yet it is from the calm and steady control that some of Sleigh's most emotionally powerful moments are acheived. . . .Waking is one of the strongest collections of poems to appear in the last few years."—Michael Collier, Partisan Review

"Tom Sleigh's second book of poems, Waking is so fine one can hardly do justice to it in a review. The second poem, 'Ending,' is a remarkable piece of work which introduces the notion of the 'hook'—which hooks us to life even while it kills us. It is a presence of painful mortality which haunts the rest of the book."—Liz Rosenberg, New York Times Book Review

"Waking handsomely and affirmatively demonstrates its own clean and demanding premise: one's imagination is awakened to life by the burden of mortality. One reads in these poems a view not of the poet's suffering, but of our own temporal joys and sorrows."—Jay Meek, Hungry Mind Review

"With the publication of Waking, his second collection of poems, Tom Sleigh establishes his voice among the strongest of his generation. A poet of subject and craft, his skill allows him to avoid the slackness of much free verse and, at the same time, break free of the stiff old numbers in order to create a spoken language of rhythmic intensity and eloquence. . . . In this book Tom Sleigh's vigilance provides his readers with an invaluable gift: we can wake our lives."—Stuart Dischell, Boston Review
TABLE OF CONTENTS