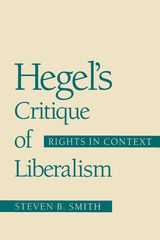 In Hegel's Critique of Liberalism, Steven B. Smith examines Hegel's critique of rights-based liberalism and its relevance to contemporary political concerns. Smith argues that Hegel reformulated classic liberalism, preserving what was of value while rendering it more attentive to the dynamics of human history and the developmental structure of the moral personality. Hegel's goal, Smith suggests, was to find a way of incorporating both the ancient emphasis on the dignity and even architectonic character of political life with the modern concern for freedom, rights, and mutual recognition. Smith's insightful analysis reveals Hegel's relevance not only to contemporary political philosophers concerned with normative issues of liberal theory but also to political scientists who have urged a revival of the state as a central concept of political inquiry.
AUTHOR BIOGRAPHY
Steven B. Smith is professor of political science at Yale University.
TABLE OF CONTENTS


Preface
A Note on the Texts
1. Why Hegel Today?
2. The Origins of the Hegelian Project
Hegel and the Divided Self
Romanticism and Revolution
Civic Religion, Positivity, and the Volksgeist
The Discovery of the Dialectic
3. The Critique of the Liberal Theory of Rights
Hegel and the Enlightenment
The Theory of Natural Rights
Critique of Natural Rights, I: Hobbes and Locke
Critique of Natural Rights, IIa: Kant
Critique of Natural Rights, IIb: Fichte
Hegel and the French Revolution: Rousseau
The Politics of Virtue
4. Hegel's Theory of Rights
The Concept of Human Rights and Its Critics
The Subject of Rights
The Origin of Rights
The Right of Recognition
5. The Hegelian Rechtsstaat
Hegel and Practical Philosophy
Civil Society and the Corporation
The Rule of Law
The Universal Class
The Monarch
War and International Relations
6. Hegel's Idea of a Critical Theory
What Is Dialectic?
Immanent Critique and the Foundations of Phenomenology
Bildung and Negative Dialectics
The Skeptical Moment
The Logic of Determinate Negation
7. Reason and History
Reason and Understanding
Contradiction
Rational Necessity
Absolute Knowledge and the End of History
8. Hegel and the Liberal Legacy
Index