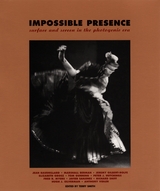 Impossible Presence brings together new work in film studies, critical theory, art history, and anthropology for a multifaceted exploration of the continuing proliferation of visual images in the modern era. It also asks what this proliferation—and the changing technologies that support it—mean for the ways in which images are read today and how they communicate with viewers and spectators.
Framed by Terry Smith's introduction, the essays focus on two kinds of strangeness involved in experiencing visual images in the modern era. The first, explored in the book's first half, involves the appearance of oddities or phantasmagoria in early photographs and cinema. The second type of strangeness involves art from marginalized groups and indigenous peoples, and the communicative formations that result from the trafficking of images between people from vastly different cultures. With a stellar list of contributors, Impossible Presence offers a wide-ranging look at the fate of the visual image in modernity, modern art, and popular culture.