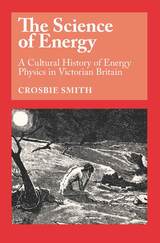 Although we take it for granted today, the concept of "energy" transformed nineteenth-century physics. In The Science of Energy, Crosbie Smith shows how a North British group of scientists and engineers, including James Joule, James Clerk Maxwell, William and James Thomson, Fleeming Jenkin, and P. G. Tait, developed energy physics to solve practical problems encountered by Scottish shipbuilders and marine engineers; to counter biblical revivalism and evolutionary materialism; and to rapidly enhance their own scientific credibility.

Replacing the language and concepts of classical mechanics with terms such as "actual" and "potential" energy, the North British group conducted their revolution in physics so astutely and vigorously that the concept of "energy"—a valuable commodity in the early days of industrialization—became their intellectual property. Smith skillfully places this revolution in its scientific and cultural context, exploring the actual creation of scientific knowledge during one of the most significant episodes in the history of physics.

AUTHOR BIOGRAPHY
Crosbie Smith is reader in History and Cultural Studies of Science and director of the Centre for History and Cultural Studies of Science at Rutherford College, University of Kent at Canterbury. He is coauthor of Energy and Empire: A Biographical Study of Lord Kelvin and coeditor of Making Space for Science: Territorial Themes in the Shaping of Knowledge.
TABLE OF CONTENTS


List of Figures
Preface
Abbreviations
1. Introduction: a History of Energy
2. From Design to Dissolution: Scotland's Presbyterian Cultures
3. Recovering the Motive Power of Heat
4. Mr. Joule of Manchester
5. Constructing a Perfect Thermo-dynamic Engine
6. 'Everything in the Material World is Progressive'
7. 'The Epoch of Energy': the New Physics and the New Cosmology
8. The Science of Thermodynamics
9. North Britain versus Metropolis: Territorial Controversy in the History of Energy
10. Newton Reinvented: Thomson and Tait's Treatise on Natural Philosophy
11. Gentlemen of Energy: the Natural Philosophy of James Clerk Maxwell
12. Demons versus Dissipation
13. Energy and Electricity: 'the Apparatus of the Market Place'
14. Sequel: Transforming Energy in the Late Nineteenth Century
Epilogue
Notes
Bibliography
Index