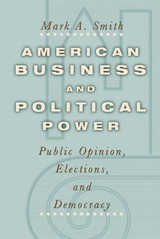 Most people believe that large corporations wield enormous political power when they lobby for policies as a cohesive bloc. With this controversial book, Mark A. Smith sets conventional wisdom on its head. In a systematic analysis of postwar lawmaking, Smith reveals that business loses in legislative battles unless it has public backing. This surprising conclusion holds because the types of issues that lead businesses to band together—such as tax rates, air pollution, and product liability—also receive the most media attention. The ensuing debates give citizens the information they need to hold their representatives accountable and make elections a choice between contrasting policy programs.

Rather than succumbing to corporate America, Smith argues, representatives paradoxically become more responsive to their constituents when facing a united corporate front. Corporations gain the most influence over legislation when they work with organizations such as think tanks to shape Americans' beliefs about what government should and should not do.
AUTHOR BIOGRAPHY
Mark A. Smith is an assistant professor of political science at the University of Washington.
TABLE OF CONTENTS