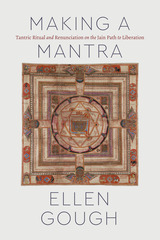 Jainism originated in India and shares some features with Buddhism and Hinduism, but it is a distinct tradition with its own key texts, art, rituals, beliefs, and history. One important way in which it has often been distinguished from Buddhism and Hinduism is through the highly contested category of Tantra: Jainism, unlike the others, is said to be a non-tantric tradition. But in Making a Mantra, historian of religions Ellen Gough refines and challenges our understanding of Tantra by looking at the development over two millennia of something that has never been considered “tantric”: a Jain incantation, or mantra, that evolved from an auspicious invocation in a second-century text into a key component of mendicant initiations and meditations that continue to this day.

Typically, Jainism is characterized as a celibate, ascetic path to liberation in which one destroys karma through austerities, while the tantric path to liberation is characterized as embracing the pleasures of the material world, requiring the ritual use of mantras to destroy karma. Gough, however, argues that asceticism and Tantra should not be viewed in opposition to one another. She does so by showing that Jains perform “tantric” rituals of initiation and meditation on mantras and mandalas. Jainism includes kinds of tantric practices, Gough provocatively argues, because tantric practices are a logical extension of the ascetic path to liberation.
AUTHOR BIOGRAPHY
Ellen Gough is assistant professor of religion at Emory University.
TABLE OF CONTENTS

Part One: Setting the Scene
Introduction. Tantra, Asceticism, and the Life of a Mantra
1. From Maṅgala to Mantra: Destroying Karma with Sound

Part Two: The Tantricization of Mendicant Initiation
2. Maṇḍalas and Mantras: The Jina’s Preaching Assembly as a Tantric Initiation Diagram
3. Sects and Secrecy: Comparing the Mantras of the Levels of Initiation

Part Three: The Tantricization of Daily Worship
4. Tantric Meditation as a Means of Liberation
5. The Tantric Rituals of Modern Monks

Conclusion: The Past Lives of Modern Mantras
Acknowledgments
Notes
Bibliography