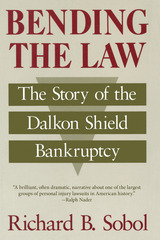 Winner of the American Bar Association's 1992 Silver Gavel Award "in recognition of an outstanding contribution to public understanding of the American system of law and justice."

"Mr. Sobol has produced a readable yet fully researched and detailed study of the operation of the bankruptcy and its effects upon all concerned—the women who were injured, the swarms of lawyers who represented parties in the bankruptcy, and the court which oversaw the bankruptcy in Richmond. . . . This book adds greatly to the current debate about how strong a managerial federal judge our system should have."—Paul D. Rheingold, New York Law Journal

"Bending the Law is polemical and relentless. It is also minutely researched, fluidly written, and persuasive."—Paul Reidinger, ABA Journal

"Bending the Law is a must read for bankruptcy practitioners, and for anyone else concerned about the use of bankruptcy law to deal with mass torts. Although its author is a civil rights lawyer, he details the subtle art of practicing bankruptcy law with a discerning eye, and is a gifted storyteller as well."—Joryn Jenkins, Federal Bar News and Journal

"This is an accessible history of the case by a veteran civil-rights lawyer."—Washington Post Book World
TABLE OF CONTENTS


Preface
1. The Dalkon Shield
2. Judge Merhige
3. The Law
4. Merhige Takes Control
5. Representation of the Women
6. Business as Usual
7. The Determination of Eligible Claimants
8. Future Claims
9. Another Source of Funds, Claims against Aetna
10. Emergency Fertility Procedures
11. The Exclusivity Period
12. The McGovern Process
13. The Estimation
14. Bidding for Robins
15. The Plan of Reorganization
16. Disclosure
17. Confirmation
18. Release of Aetna
19. The Appeals
20. Control of the Trust
21. Running the Trust
22. Conclusion
Notes
Table of Transcript Citations
Table of Citations to Statutes and Rules
Index