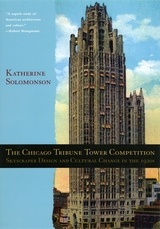 The Chicago Tribune Tower Competition: Skyscraper Design and Cultural Change in the 1920s
by Katherine Solomonson
University of Chicago Press, 2003
Paper: 978-0-226-76800-7
In 1922, the Chicago Tribune sponsored an international competition to design its new corporate headquarters. Both a serious design contest and a brilliant publicity stunt, the competition received worldwide attention for the hundreds of submissions—from the sublime to the ridiculous—it garnered.

In this lavishly illustrated book, Katherine Solomonson tells the fascinating story of the competition, the diverse architectural designs it attracted, and its lasting impact. She shows how the Tribune used the competition to position itself as a civic institution whose new headquarters would serve as a defining public monument for Chicago. For architects, planners, and others, the competition sparked influential debates over the design and social functions of skyscrapers. It also played a crucial role in the development of advertising, consumer culture, and a new national identity in the turbulent years after World War I.
AUTHOR BIOGRAPHY
Katherine Solomonson is an associate professor of architecture and co-head of the Department of Architecture at the University of Minnesota's College of Architecture and Landscape Architecture.
REVIEWS
"Solomonson's history of the competition to design one of America's most famous buildings sets a fine example of how to portray ambitions—artistic and other kinds—against the social background of their times. Scores of illustrations show the dizzying variety of designs that contended against John Mead Howells and Raymond Hood's soaring finalist. Solomonson shows that far more than money, prestige and recognition rode on the competition: the '20s saw the birth of the idea of architecture as corporate branding. At stake was the image that Chicago and implicitly America projected to the larger world."
— Kenneth Baker, San Francisco Chronicle

"Solomonson understands the issues and writes engagingly not only about the competition itself, but about the architectural and commercial cultures—both European and American—that formed its backdrop."
— Times Literary Supplement

"A fascinating social and material history. . . . Offers an exemplary model for anyone seeking to understand what buildings mean to people."
— Deborah Fausch, Chicago Tribune

"[Solomson tells] the fascinating story of this competition, the diverse designs it attracted, and its lasting impact. . . . This is the most detailed account of its history published so far."
— Architectural Science Review

“What distinguishes Solomonson’s endeavor is the range of broader issues that are integrated with architectural ones immediately at hand. Matters of Americanization and community, or city planning and urban design, of corporate symbolism and artistic expression, of historicity and modernity, and of differing cultural perspectives among countries are among the numerous areas examined. . . . The range of material presented in a rigorous and engaging narrative should render the book of benefit to many scholars concerned with American culture as well as with the built environment. Solomonson has produced an exemplary case study that is likely to enjoy longstanding appreciation."
— Richard Longstreth, American Studies International