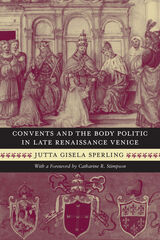 In late sixteenth-century Venice, nearly 60 percent of all patrician women joined convents, and only a minority of these women did so voluntarily. In trying to explain why unprecedented numbers of patrician women did not marry, historians have claimed that dowries became too expensive. However, Jutta Gisela Sperling debunks this myth and argues that the rise of forced vocations happened within the context of aristocratic culture and society.

Sperling explains how women were not allowed to marry beneath their social status while men could, especially if their brides were wealthy. Faced with a shortage of suitable partners, patrician women were forced to offer themselves as "a gift not only to God, but to their fatherland," as Patriarch Giovanni Tiepolo told the Senate of Venice in 1619. Noting the declining birth rate among patrician women, Sperling explores the paradox of a marriage system that preserved the nobility at the price of its physical extinction. And on a more individual level, she tells the fascinating stories of these women. Some became scholars or advocates of women's rights, some took lovers, and others escaped only to survive as servants, prostitutes, or thieves.


List of Illustrations
List of Tables
Foreword by Catharine R. Stimpson
Acknowledgements
List of Abbreviations
Introduction
1. Potlatch alla Veneziana: Coerced Monachizations in the Context of Patrician Intermarriage and Conspicuous Consumption
2. Marvelous Venice: A Virgin City and Its Noble Body Politic
3. The Theology and Politics of Clausura
4. The Economic Dimensions of the Convent-Reform Program
5. Convents and the Question of State Sovereignty
Conclusion
Appendix