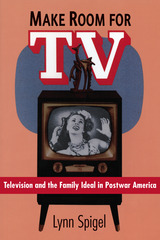 Between 1948 and 1955, nearly two-thirds of all American families bought a television set—and a revolution in social life and popular culture was launched.

In this fascinating book, Lynn Spigel chronicles the enormous impact of television in the formative years of the new medium: how, over the course of a single decade, television became an intimate part of everyday life. What did Americans expect from it? What effects did the new daily ritual of watching television have on children? Was television welcomed as an unprecedented "window on the world," or as a "one-eyed monster" that would disrupt households and corrupt children?

Drawing on an ambitious array of unconventional sources, from sitcom scripts to articles and advertisements in women's magazines, Spigel offers the fullest available account of the popular response to television in the postwar years. She chronicles the role of television as a focus for evolving debates on issues ranging from the ideal of the perfect family and changes in women's role within the household to new uses of domestic space. The arrival of television did more than turn the living room into a private theater: it offered a national stage on which to play out and resolve conflicts about the way Americans should live.

Spigel chronicles this lively and contentious debate as it took place in the popular media. Of particular interest is her treatment of the way in which the phenomenon of television itself was constantly deliberated—from how programs should be watched to where the set was placed to whether Mom, Dad, or kids should control the dial.

Make Room for TV combines a powerful analysis of the growth of electronic culture with a nuanced social history of family life in postwar America, offering a provocative glimpse of the way television became the mirror of so many of America's hopes and fears and dreams.
TABLE OF CONTENTS


Acknowledgments
Introduction
1. Domestic Ideals and Family Amusements: From the Victorians to the Broadcast Age
2. Television in the Family Circle
3. Women's Work
4. The Home Theater
5. The People in the Theater Next Door
Epilogue
Notes
Index