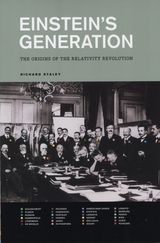 Why do we celebrate Einstein’s era above all other epochs in the history of physics? Much of the history of physics at the beginning of the twentieth century has been written with a sharp focus on a few key figures and a handful of notable events. Einstein’s Generation offers a distinctive new approach to the origins of modern physics by exploring both the material culture that stimulated relativity and the reaction of Einstein’s colleagues to his pioneering work.

Richard Staley weaves together the diverse strands of experimental and theoretical physics, commercial instrument making, and the sociology of physics around 1900 to present the collective efforts of a group whose work helped set the stage for Einstein’s revolutionary theories and the transition from classical to modern physics that followed. Collecting papers, talks, catalogues, conferences, and correspondence, Staley juxtaposes scientists’ views of relativity at the time to modern accounts of its history. Einstein’s Generation tells the story of a group of individuals which produced some of the most significant advances of the twentieth century; and challenges our celebration of Einstein’s era above all others.

AUTHOR BIOGRAPHY
Richard Staley is assistant professor in the Department of the History of Science at the University of Wisconsin–Madison.
REVIEWS

"Einstein's Generation is a magnificent achievement and a work of great scholarship. Staley succeeds brilliantly in providing new ground for understanding how Einstein gradually emerged as the central figure within the German physics community."

"Richard Staley, a historian of science at the University of Wisconsin-Madison, has taken a novel approach to presenting the origins of the relativity revolution. His book reads not as a biography of Albert Einstein, but instead as a considered account of the technological and scientific innovations upon which Einstein’s groundbreaking theory was founded. Einstein’s Generation exposes readers to an era of turn-of-the-20th century scientists whose contributions have too often gone overlooked in histories of modern physics."
— Seed

"Einstein's Generation succeeds at rethinking the story of relativity's emergence. It carefully unpacks and redisplays the canonical events along the road to Einstein's apotheosis in a valuable way. . . . The case made here for the propagation of relativity as the result of the interests and idiosyncracies of a community, not just the brilliance of a gifted individual, is very effective."
— British Journal for the History of Science

II. Physics in 1900
Chapter 4. Science on Display: The World’s Fair
Chapter 5. A Discipline at Work: The International Congress of Physics

III. From the Promise of the Electron to Einstein’s Theory of Relativity
Chapter 6. The Empirical Electron: Space and Time on a Photographic Plate
Chapter 7. Relativity and Electron Theory, 1905–1911
Chapter 8. On the Histories of Relativity